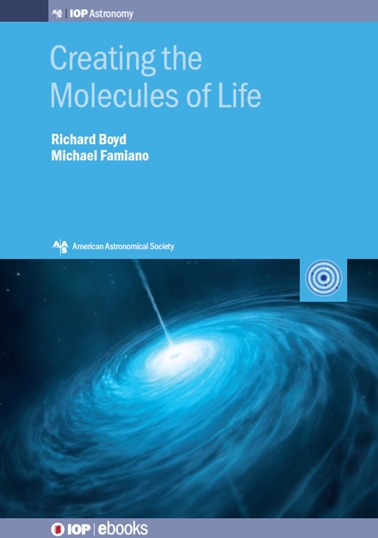 You can download this book or purchase it in hard copy. See links below.

Creating the Molecules of Life

By Richard N. Boyd and Michael A. Famiano

The mystery of how the chirality, or handedness, of the amino acids, the molecules from which our bodies create the proteins we need to exist, continues to challenge scientists.

Experiments by Miller and Urey in the 1950s demonstrated that many of the 20 amino acids we need for life could be made by a spark discharge—lightning—in an appropriate chemical environment, suggesting that the molecules of life were created on Earth. However, meteorites that have hit the Earth have been found to contain amino acids, proving that they are also created in outer space.

The key in deciding if these molecules are home grown or are created in the cosmos may be their handedness, or chirality, which can be either left- or right-handed. The amino acids in our bodies and also found in all living beings and in many other places on Earth are almost entirely left-handed, although equal numbers of left- and right-handed amino acids were created in the Miller-Urey experiment.

“Creating the Molecules of Life” describes several of the theories of chirality creation, along with a new one, the Supernova Neutrino Amino Acid Processing model, originally devised by Boyd, Kajino, and Onaka, and greatly improved as a result of the addition of Mike Famiano and Yiraong Mo to the collaboration.

The new model involves molecular chirality selection in the magnetic field and intense electron antineutrino flux produced in a variety of cosmic sites. One site that appears to satisfy these requirements is a close binary system consisting of a massive star and a neutron-star companion. The neutron star sucks the outer one or two layers from the massive star, creating an accretion disk, in which the amino acids are created. When the massive star explodes in a supernova, it produces copious numbers of electron antineutrinos, which process the amino acids creating a preference for the left-handed ones.

An even better site appears to result from the merger of two neutron stars. One such site was recently observed in gravitational waves, gamma rays, x-rays, and optical photons. However, we believe it also may have produced an abundance of chirally selected amino acids. It appears that this site can produce a preferred handedness at the level found in the meteorites.

The book is about origins, so it not only describes how the amino acids might achieve their chirality, but includes chapters on the big bang and on how elements are made in stars. The final chapter has a section on extremophiles, whose existence supports the contention that the complex molecules of life can survive under a wide variety of conditions.

But the book’s primary purpose is to present the evidence regarding how life on Earth began, and prepare the reader for future developments that will resolve that question. To order a copy of this book, check with IOP Publishing for “Creating the Molecules of Life,” by Richard N. Boyd and Michael A. Famiano (2018). The book can be purchased either in hard copy or in electronic form.

An Introduction to Nuclear Astrophysics

Nuclear Astrophysics is the study of how all naturally occurring elements formed and evolved into our present universe via nuclear processes, beginning with the Big Bang and continuing today in astrophysical objects such as stars, x-ray bursters, and supernovae. Emerging from traditional studies in astrophysics and particle research, this cross disciplinary field touches upon astronomy, astrophysics, cosmology, and particle physics.

In An Introduction to Nuclear Astrophysics, the author includes basic nomenclature information so that students from astronomy or physics can quickly orient themselves in the material. Subsequent chapters describe worldwide Earthbound and space borne instruments operating in service to nuclear astrophysics; background topics such as nuclear and neutrino physics; scattering formalism and thermonuclear reaction rates; information on galactic chemical evolution; solar nucleosynthesis; nucleosynthesis of heavier elements through s-, r-, and p-processes;, and gamma-ray bursts.

Each chapter includes problem sets against which students may test their knowledge before moving ahead, and copius references are included to guide students to further study.

This book is intended for undergraduate and graduate students in astronomy and astrophysics. It is also an invaluable overview of the subject for researchers in nuclear astrophysics and related fields.