Astrobiology: Creation of the Amino Acids

A puzzle that has baffled astrobiologists for decades is how all the amino acids, from which our bodies make proteins, ended up with a strong preference for left-handed chirality. In nature, molecules that possess chirality can be either “left-handed (LH)” or “right-handed (RH).” If one produces amino acids in the laboratory, as was done by Miller and Urey in the 1950s, one produces equal numbers of LH and RH molecules, but somehow nature managed to favor LH amino acids to the virtual exclusion of their RH cousins.

Several theories exist to describe how the LH amino acids were created and selected, but observation of LH amino acids in meteorites suggests that amino acids are made in outer space. And their chirality is also apparently selected there. 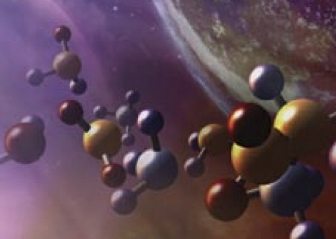 Boyd and his collaborators have developed one of the amino acid creation theories. It depends on selective destruction of one orientation of the nitrogen nuclei in the molecules. This in turn selects one of the two molecular chiralities.

What the model requires is a super-intense magnetic field and an intense flux of electron antineutrinos. Both are afforded in a close binary system consisting of a massive star and a neutron star when the massive star becomes a supernova. A system that may be even better is that provided by two merging neutron stars.